Did you know that in the Caribbean Islands Carnival is a celebration of food?

Across the Caribbean, February and March mark the beginning of Carnival festivities. 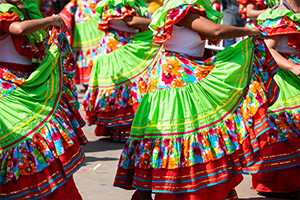 Carnival in the Caribbean is synonymous with joyous celebration and troops of glittering dancers shimmying through the streets, but originally it was the last opportunity for medieval peasants to eat well as food supplies dwindled towards the end of winter.

On what is now called Shrove Tuesday, commoners would eat the remaining lard, butter, dairy, and meat before they began to spoil.

Fast forward to the present and food is still very much at the center of Carnival celebrations. “Barbeque is everywhere during Carnival on Curacao,” points out Tom Bielsma, branch manager of AGS Curacao. “Why? Because it’s the easiest thing to eat while you watch the parades from the side of the road!”

Across the Caribbean, February and March mark the beginning of Carnival festivities. During this time, many islands share their traditions, including Jump-ups – parties where you “jump up” to dance, and parades of all kinds set to the beat of Tumba and Calypso rhythms.

Celebrations culminate with the burning of the Momo, a papier-mâché effigy who is introduced as the king of proceedings when Carnival begins. Momo is the symbol of mischief and decadence who is set alight to demonstrate that no matter how fun the Carnival was, all good things must come to an end, much like the winter food supplies of the past.